"Who is this girl? She's on her way somewhere.  Didn't she have time to comb her hair?"
"Well, it's not tangled, so maybe it will settle down pretty when she stops running. She  has a mischievous, intent  look about her. She is going somewhere but her hair is going somewhere else!  I call her Two-way Tessie."

Two-way Tessie
sometimes looks messy.
but she also knows
how to be dressy,
when the days
are not too stressy. 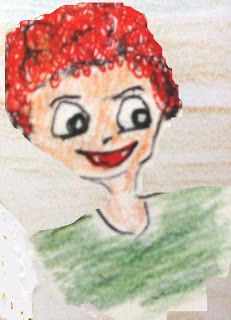 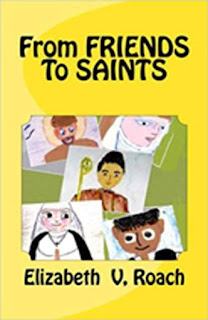 For ages  8 to 12
FROM FRIENDS TO SAINTS presents the stories of five Saints. Each one knew how to make friends. Some were  born to biracial parents.  Some were born in one country, and served in another.  Among them, some were well off; others were poor. One was an orphan, one a lawyer, one a barber, another a soldier. Some were immigrants.   Some had exciting travel experiences, others loved to dance and sing and play the guitar. All of them loved God and the poor.  Read the stories and discover where they found their friends.
http://www.amazon.com/-/e/B004G9X3NW

Posted by Elizabeth V Roach at 8:48 AM 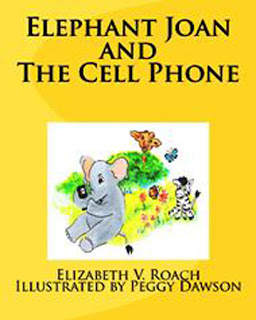 Boys and girls from 2 to 8 will delight in the pictures and antics of Elephant Joan and her adventures with a cell phone. The story by Elizabeth V. Roach and the illustrations by Peggy Dawson combine to provide a child with early experience of respect for the environment and its inhabitants. 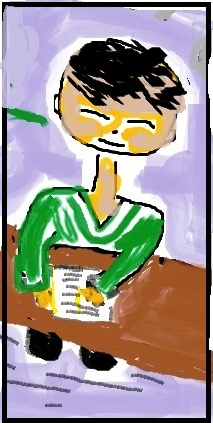 A GIFT FOR AMERICA

“Good  Morning, Christopher!” the tutor in a Catholic school said.
Christopher was a new student, six years old, in First Grade. He needed help with English, his second language. This was his first meeting with the tutor.
Christopher didn’t answer the tutor. He looked unhappy.
The tutor greeted him in Spanish.  .
When he still didn’t answer, the teacher asked if something was the matter.
“Don’t you feel well?  Are you sick?  Does something hurt?” She asked in English and in Spanish.
Christopher’s bottom lip trembled. He tried hard to hold back the tears.
At last, the words burst out.
“The teacher screamed at me because I can’t read,” he said. The teacher was not his regular teacher, but a  substitute who came occasionally.
Now, the new tutor promised she would never scream at him. Together they did the lesson. He seemed happier when she took him back to his classroom.
Each day, Christopher and the new tutor met. His English improved rapidly.
Then, one day, Christopher, didn’t seem to want to begin the class. He looked pensive.
The tutor asked, “Is something the matter?”
Christopher struggled to say  all the words correctly.  “You know that teacher who yelled at me? She doesn’t yell anymore, because I can read. I asked jesus to help me, and he did!”
As the tutor got to know Christopher, she came to love him. He was such a thoughtful six year old.
One day, Christopher came to the class with a puzzled look on his little face. He had just come from Religion Class.  He looked up at the tutor and asked, “What was before God?”
The tutor tried to answer, but she was amazed at the profound question six-year-old Christopher asked.
When she got home that night, she had supper with her family.
She told them about Christopher and his question.
Her husband said,  “How fortunate we are that so many people from other countries come to America. Christopher is a gift. If he can ask questions like this at six, imagine what he will contribute to our country as he learns more and more.
“We have a deep thinker in this little child. We need to give thanks to God that he has led him here.”
The tutor’s children bowed their heads as their father and mother prayed and gave thanks for Christopher and the gifts immigrants bring to America.
Then, they played a game to see who could name famous immigrants who have been gifts to America.


They named scientists, doctors, statespersons and many others.  Can you name some?

Nobody wants to waste time. Some save time. Others buy time. Some kill time.
Older people will tell you time flies.  Others say, time is money. Teenagers find time hangs heavy on their hands.  What is time? Do you ever wonder how people came to say such strange things about time?

Astronomers, physicists, and many others have been trying to solve the mystery of time for thousands of years.  Astronomers study the stars. Physicists want to know how and when time began. Accurate timekeeping is important for everyone from athletes to heart surgeons. 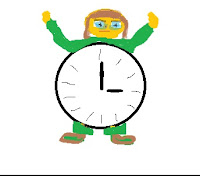 Twenty-thousand years ago, when no one had ever heard of minutes, hours or seconds, people noticed that the sun came up every day and the moon every night. They scratched lines and made little holes on wood and even on bones to keep track of time. They were the first time detectives gathering evidence. 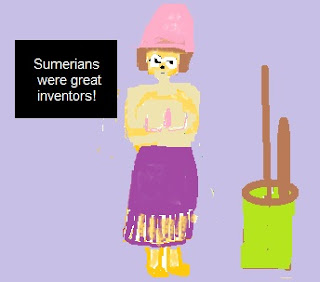 ﻿
Five thousand years ago Sumerians were a people who lived in what is present day Iraq. They watched the sun, the moon and the stars. From their studies they made a calendar with thirty-day months. Instead of twenty-four hour days, they divided the daylight into twelve parts.

Later, in Egypt, other people noticed a special star. It appeared every year, when the Nile River began to overflow and flood their land.  They invented a calendar with 365 days. The year they did that is called the first year of recorded history. Today we call that 4326 B.C.

Egyptians around 3500 B.C. built four-sided, tall, slender posts that tapered to a point at the top. We call these obelisks. The Egyptians watched the shadows their obelisks cast. The shadow moved from one side of the obelisk to the other as the day went on. Time detectives had discovered noon. At one time of year, the shadow was longer. At another time, the shadow was shorter. That longest shadow fell on the shortest day.  The shortest shadow fell on the longest day..
By the year 2000 B.C. the Sumerians and their culture had disappeared. Babylonians then living in Iraq knew nothing of the Sumerian inventions. They didn’t know about the thirty-day months the Sumerians had developed. So, the Babylonians divided the year into twelve alternating months. One month had 29 days and the next one had 30 days. Their calendar had 354 days.
Even before the Babylonians made their calendar, the Mayan people, in Central America, were watching Venus, the morning star. They had two different systems for measuring a year. For some, the year had 260 days. For others, a year had 365 days. Mayans kept detailed records of their studies. They came to believe that time began in the year 3113 B.C.  Eventually, their time studies became part of the Aztec System. The Aztecs became famous as time detectives. They recorded important events on large stones.  Some of these stones still exist.
Having a calendar helped a lot. Farmers could predict the times of the year when certain crops should be planted. Celebrations could be scheduled, and plans could be made for special occasions during the year.
Soon people also wanted to plan their day as well as the year. So, they invented sundials. Egyptians probably made the first one.  It was made of a bar of wood or stone with a slightly higher crossbar at one end. The higher crossbar cast a shadow on the lower, longer bar.
Time detectives marked the places where the sun’s shadow fell for each hour, and even the minutes. Some sundials were very elegantly carved in stone. Even today sundials are used in many places.  They come in all shapes and sizes.

A sundial has two main parts. The face and the gnomon. The face is the flat part. The gnomon is the element that casts the shadow. To correctly tell the time, the gnomon has to point to the North Pole, or in the Southern Hemisphere to the South Pole.
Some sundials are huge and built in town squares. Others can be seen on the walls of buildings. A famous one in Milan has the form of a ship.
In Frankfort, Kentucky, a sundial honors the veterans from Kentucky who lost their lives in the Vietnam War.  It is built so that, the shadow falls on the name and date of each war hero’s  anniversary of death. Located in a plaza that overlooks the State Capitol, it also tells time and serves as a huge solar calendar.
Over the centuries, time detectives worked hard to calculate the correct time.  Eventually,  they invented clocks. They tried water clocks, and. mechanical clocks with pendulums. Today we have quartz, computer chip, and even atomic clocks.

. For centuries, time was measured according to the earth’s movements around the sun, but clocks always had to be corrected. The “detectives” found the clocks could be slightly ahead or behind the sun’s time.  This is because the earth’s axis is slightly tilted and our planet follows an elliptical  route around the sun. Today, international agreements determine what time it is all over the world

Atomic clocks give us a very precise time. They depend on the natural frequency of the Cesium atom. Time detectives at the U.S. Naval Observatory say atomic clocks are still off by one millionth of a second per year.

Physicists have discovered many things about time. The Big Bang Theory tells us that the world is about 14 billion years old. But is that when time began?

The earth continues to twirl through the heavens. Astronomers discover black holes, new particles, and many other wonderful aspects of our world.  Physicists calculate their meaning; geologists examine the earth, and astronauts take photos. Yet, time still holds many mysteries! Do you think about time?  What is it for? Do you like time to yourself? Do you spend time with others? How do you use time?
To learn more about sundials: Look for the North American Sundial Society on the Internet.

You will find a list of sundials in most USA States and some other countries, too.
Posted by Elizabeth V Roach at 9:19 AM

Please be careful NOT to click on NEXT BLOG (above) It will take you to someone else’s blog which may not be a children’s blog. Click Blog Archive for previously posted stories on this blog. Thank you.